Earlier this year, footwear manufacturer Birkenstock announced that effective January 1st, their merchandise would no longer be available for purchase on Amazon. In fact, they have issue the cautionary warning that any of their product found on Amazon likely was counterfeit.

Fashion brands who are increasingly turning to eCommerce platforms like Amazon and Alibaba because it is a more direct pipeline to consumers than attempting to use a retailer are finding themselves the victim of knockoffs or other shady practices wherein these large platforms are either unaware, or complicit, in undermining and contributing to these brands being unfairly copied.

A licensed nurse, Whaley started a bedding business on Amazon that reached $700,000 in annual sales within three years. Her patented product called BedBand consists of a set of shock cords, clamps and locks designed to keep fitted bed sheets in place.

Whaley and her husband found quite an audience, selling up to 200 units a day for $13.99 a set. BedBand climbed into the top 200 selling products in the home and kitchen category. That was 2013.

By mid-2015, the business was in a tailspin. Revenue plummeted by half and Whaley was forced to lay off eight employees. Her sheet fastener had been copied by a legion of mostly Chinese knockoffs that undercut BedBand on price and jumped the seller ranks by obtaining scores of reviews that watchdog site Fakespot.com determined were inauthentic and “harmful for real consumers.”

Customs and Border Protection have long had processes in place where companies can submit what they believe are IPR (Intellectual Property) violations for review and action. 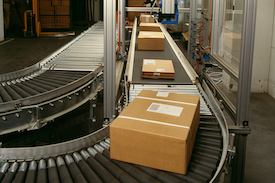 eCommerce platforms like Amazon and Alibaba have been hit by claims of selling knock-off merchandise.

Those channels were typically stopping cargo at the time of importation. But don’t forget, Amazon is now an NVOCC, meaning that they can build their own boxes at origin rather than taking control of cargo once it arrives in the United States.

Amazon does have a vehicle to report knock-offs for sale, but like any other technology platform, it is near impossible to get a live human to help because you have to fill out a form.

Fashion and jewelry companies who feel that their goods are being copied and sold on either of these platforms or elsewhere should contact our licensed Customs broker, Jay Breda, to discuss the next steps to report and get these items removed from sale in the United States.