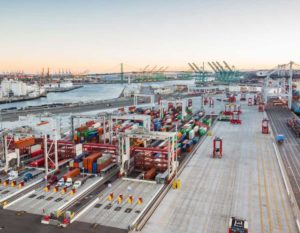 In the rapidly-evolving port preparations being made around the US to manage the influx of new mega-container ships, the Port of Los Angeles has begun adding automated services to their offerings. With a $1 billion in planned improvements, The TraPac Terminal Automation project makes this one of the first ports to offer fully-automated straddle carriers and automatic stacking cranes.

Considering the Panama Canal has been expanded to receive extra large ships, most ports are working diligently to dredge, repair, improve and support their infrastructure to capitalize on the rising number of containers set to arrive. Los Angeles, the nation’s busiest port since 2002, sits in the precarious position atop the list. As Asian-origin cargo can now traverse the canal and dock at ports like NY/NY and Virginia, LA must work to ensure they don’t lose part of their considerable market share to the East Coast. Due to a work stoppage in 2014, caused by labor concerns, a massive backup in containers caused extreme delays as rerouted cargo was sent to other ports. 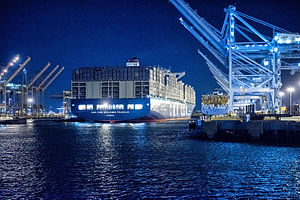 The Port of Los Angeles handled $272 billion and 8.8 million TEUs in 2016 with a size of 7,500 acres along 43 miles of waterfront it includes 270 berths, 16 marinas and 27 terminals. The TraPac Terminal is capable of running 24 hours a day to manage the constant flow of traffic in and out of the port. The automation has taken 4 years to complete and in 2020 the Port of Long Beach will have their Middle Harbor automated terminal up and running and together these two terminals will be able to handle approximately one-third of the cargo volume from these ports, which translates to over 2 million TEUs per year.